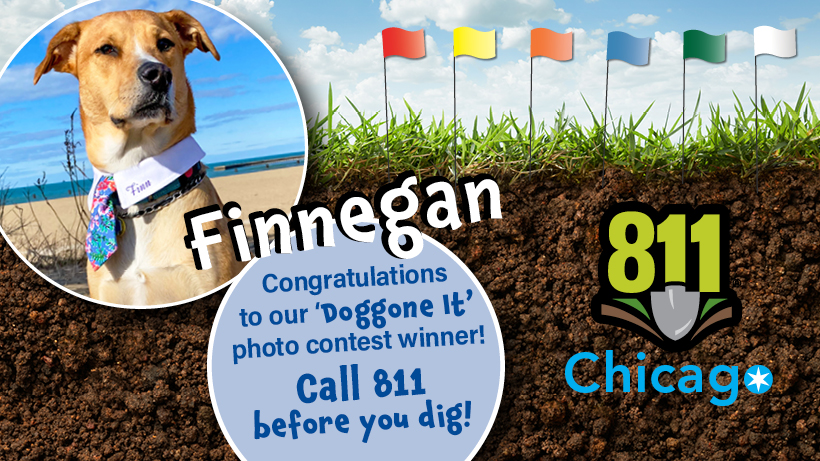 Chicago’s new safe digging ‘ambassadog’ is Finnegan, a rescue pup who once lived on the streets and now has a closet full of fancy clothes

Chicago — Peoples Gas today unveiled Finnegan — a dog made up of 17 different breeds who moved here from the South — as the company’s new safe digging “ambassadog.” Finnegan’s new job title was announced this morning at Lincoln Park Zoo, where the pup proudly stood before cameras.

Finnegan — whose full name is Finnegan Clover Clovington (and whose shorter nickname is simply “Finn”) — has a rags-to-riches backstory. He moved to Chicago from rural Mississippi after being discovered in an abandoned house. A Peoples Gas customer who lives in the Ravenswood neighborhood then met him at an adoption event and fell in love with him. 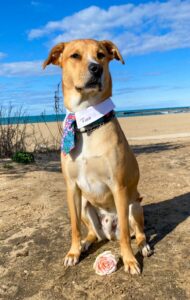 On the inside, Finnegan is a mix of labrador retriever, beagle, terrier, Australian cattle dog, chow chow, rottweiler, German shepherd, and ten other breeds. On the outside, he is 100% dapper. Finnegan has his own personal collection of bowties, neckties and bandanas. He also owns a tuxedo.

Finnegan has his own Instagram page, on which he can be seen modeling his fancy duds. His account is @finnegan_clover. 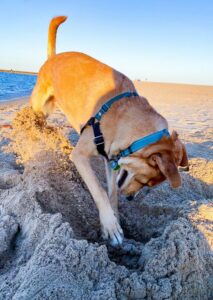 Finnegan became Chicago’s safe digging ambassadog after entering the Peoples Gas “Doggone it!” contest, in which customers send in photos of their dogs digging. The public then voted online to decide which pupper won — and was impressed by Finnegan’s distinguished demeanor, fierce digging, and of course his wardrobe. For the next year, Finnegan will be featured in Peoples Gas promotional campaigns to raise awareness about safe digging and the importance of dialing 811 at least 48 hours before starting any digging project.

About 811 Day and safe digging

Finnegan’s big win was announced on National 811 Day, which is held every year on Aug. 11 (8/11). It’s a day to elevate awareness about the need for people to call 811 two days before starting any outdoor digging project. Digging without knowing where utility lines (e.g., natural gas, electric, water, sewer, communications) are located can lead to line strikes, serious injury and property damage. When Chicagoans in the city and suburbs call 811 at least 48 hours in advance, expert technicians will come to their properties, at no charge, and mark the spots where underground utility lines are located. The idea is simple: Know what’s below. Calling 811 before digging also is required by law.

In addition to the announcement of the safe digging ambassadog, today’s 811 event at Lincoln Park Zoo featured demonstrations of how experts locate and mark buried utility lines after people call 811.

Peoples Gas has approximately 4,000 miles of underground pipelines for the distribution and transportation of natural gas in the city of Chicago. Natural gas, electric and other utility lines are buried underneath property throughout the city and could be in striking distance of anyone digging into the ground. Go to 811 Chicago for more information about 811 and safe digging practices.