CHICAGO — Peoples Gas has been named the winner of a prestigious award for making Chicago more energy efficient. The company earned the “Inspiring Efficiency Award” from the Midwest Energy Efficiency Alliance. Judges evaluated projects across 13 states that reduced energy use to benefit the environment. An innovative partnership between Peoples Gas and Chicago Public Schools (CPS) helped impress them.

The award is for the Peoples Gas Public Sector Energy Efficiency Program, in which CPS took part over the past two years. By making changes to how buildings consume energy, CPS and Peoples Gas delivered huge energy efficiency improvements to 395 schools. Natural gas use was reduced by 2.4 million therms. That is the equivalent of removing more than 2,500 gasoline-consuming vehicles from the road or creating more than 15,000 acres of carbon-absorbing forest.

The reduced energy use also earned CPS $3.7 million in incentives from Peoples Gas to help pay for the building upgrades. Plus, the schools will save money by using less energy for heat each month going forward.

Other customers of the Peoples Gas program include the Chicago Transit Authority, Chicago Park District and Cook County. Overall, in two years, the program helped local public-sector entities reduce their natural gas use by 3.5 million therms, and earned them $6 million in incentives from Peoples Gas to help pay for their energy-saving upgrades.

The Peoples Gas program could now become a model for other cities across the country.

The “Inspiring Efficiency Award” was presented to Peoples Gas at an awards dinner held in Chicago. 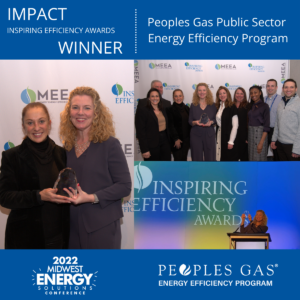